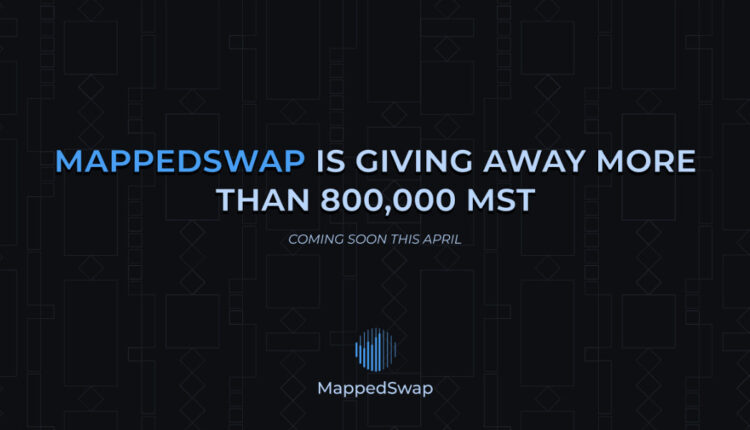 MappedSwap is giving away more than 800,000 MST this April

MappedSwap, a decentralized, on-chain cross-margin trading swap exchange built on Eurus Blockchain is launching a promotional campaign from April 13th to May 12th. During the campaign period, the exchange plans to give out more than 800,000 MST tokens, as well as provide referral and staking rebates in MST to campaign participants. The move goes in line with an unprecedented boom of the global cryptocurrency market, which currently soars over an unfathomable 2 trillion dollars capitalization.

MappedSwap also has plans to lower the barrier to entry for new users and referrers to earn MST during this campaign. Furthermore, its community will be able to margin trade at 10x leverage, thereby boosting trading and earning possibilities. The team behind the exchange highlights that referrals are an important part of the campaign and should allow all participants to improve individual earnings by sharing their very own referral code.

MappedSwap campaign in detail
Making an entrance into this market is MappedSwap Protocol, an on-chain cross-margin trading swap exchange built on Eurus Blockchain, a layer-one, decentralized, and secure inter-transfer network based on an Ethereum side-chain.

To put this growth into perspective, one of the key objectives of April’s campaign is to attract users to stake MST for additional returns. In order to earn MST, users have to either trade, stake or refer, and when the referred users trade, the link owner will also earn MST.

The MappedSwap campaign will be split into two parts, each with its own separate budget and tasks:

According to the team, users that don’t make it to the top 20 but complete the required tasks, will still be able to bag 550MST and 5USDM. Note that the number of such applications is limited and will be assorted on a first-come, first-serve basis.

For the uninitiated, a decentralized exchange (DEX) is a type of cryptocurrency exchange designed to facilitate direct peer-to-peer cryptocurrency transactions. It happens securely between two existing user wallets, without the need for an intermediary. Hence, on MappedSwap, users can swap, earn, and build on the leading decentralized crypto trading protocol. The DEX allows users to earn up to 80% of stake and referral rewards, all done without the participation of any centralized bodies.

MappedSwap is an invite-only stake and referral online protocol, so if you do not have a referral code, all you need to do is to trade or stake in MappedSwap to get one.

Additionally, all new users get a free 0.1 EUN that covers about 100 free transactions on the Eurus network. This applies to only new wallet addresses connected through MappedSwap to help users trade and stake for free.

For more information on MappedSwap and April Campaign: