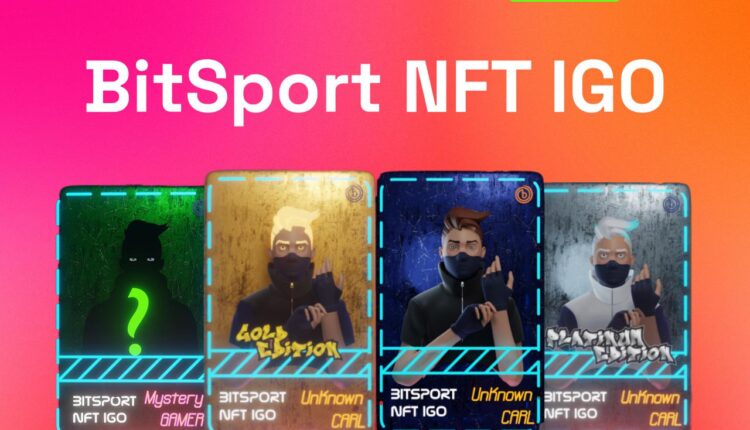 Today, Web3 innovator BitSport has announced its latest project, NFT-IGO, a new way for gamers and streamers to monetize their gameplay and interact with their fanbase. Similar to an initial public offering (IPO) in the stock market or an initial coin offering (ICO) in the crypto space, initial gamers offering (IGO) allows content creators, gamers, and streamers to create non-fungible token (NFT) card avatars that when minted will pay dividends to the owners.

This ground-breaking profit-sharing system, built on the Ethereum network, allows fans to mint an NFT of their favorite gamer and acquire a stake in their performance. As the gamers make a profit on BitSport’s existing DApp, NFT-holders are paid a percentage, depending on the tier of their stake. This first-of-its-kind utility-backed method draws from all the best parts of sponsorship, merchandise, and memberships, without the drawbacks.

“There are so many pumps and dump NFT hype schemes out there, so many NFTs that have no real utility. Utility must be tied to an NFT. That’s how NFT-IGO succeeds where so many others have failed,” says Charles Adenuoye

BitSport, a Blockchain driven, competitive gaming ecosystem, rolled out in 2018. Since then, they have focused on reinventing the Gamefi, eSports, and NFT space by creating mass-market adoption via incentivization, and welcoming traditional gamers as well as their favorite games to the Metaverse.

What will the future hold for BitSport, NFT-IGO, and DApps? BitSport envisions an ecosystem where gamers are more than just consumers. They foresee a strong community of incentivized gamers, streamers, and stakeholders, where players from rural India and Nigeria have just as many opportunities to succeed as ones in New York or Los Angeles.

Additionally, BitSport will commence its charity program which will cater to millions of gamers across Africa & India, and also plans to build World Class Gaming HUBs in these regions as seen on the NFT-IGO roadmap.

BitSport will host a “Road to Dubai Raffle Contest” for NFT- IGO holders. Winners will receive an all-expense-paid trip to the BitSport Influencer Gamers’ Yacht Insta-Duel Match, live in Dubai on 14th May 2022. Entrants must be holders of at least a 3-star BitSport Mystery Gamer NFT-IGO Card to be eligible. The raffle will be held on the 28th of April.

Numerous partnerships with high-profile gaming and music influencers would be announced a few days following the release of OzillaFiFA’s NFT-IGO drop. Ozilla is arguably one of the most skillful FIFA players in the world with more than 1M followers on TikTok, he has been featured numerous times on the official EA Sports top goals of the week. OzillaFiFA’s NFT- IGO drops on the 19th of April 2022. 12:00 PM UTC and will be available for minting amidst other incredible gamers’ NFT-IGO collections on BitSport.io