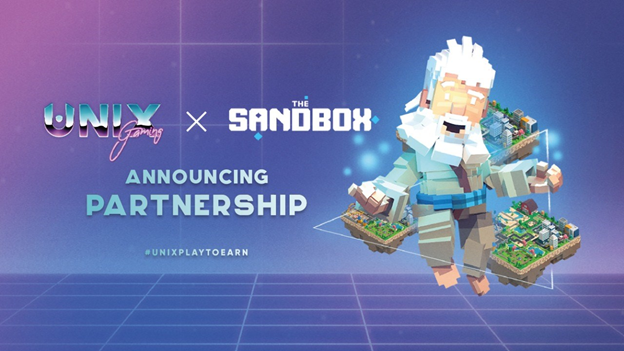 UniX Teams Up with The Sandbox to Pursue Metaverse Ecosystem Builder Ambitions | Bitcoinist.com

One of the world’s leading play-to-earn gaming guilds, UniX Gaming, looks likely to grow even bigger after cementing a key alliance with The Sandbox.

The Sandbox is one of the biggest and best-known metaverses – a sprawling, decentralized, 3D virtual world wherein users interact with other participants using avatars, explore landscapes and play games. Within The Sandbox, it’s possible to buy digital real estate and populate that land with buildings and other intricate landscapes, design and sell virtual goods and NFTs and far more besides.

The Sandbox has established partnerships with multiple big-name brands including the likes of Adidas, Care Bears, Atari and The Walking Dead, to name just a few. Despite its huge popularity, the metaverse is still a nascent idea that’s only just beginning to take shape.

UniX believes it can play a key role in the development of The Sandbox metaverse as a kind of ecosystem builder. It sees itself helping prominent brands and individuals to create their own virtual worlds and populate them with buildings, digital stores, NFTs, mini-games and more.

Some might think it’s an unusual alliance. UniX is best known as a crypto gaming guild that supports new gamers who’re looking for a way into the extremely competitive play-to-earn gaming space. One of the challenges of P2E gaming is the high entrance barrier, as the most popular games all require an expensive investment in NFTs to be able to start playing. Many players, especially from developing countries can’t afford such a large investment, and that’s where UniX comes in.

UniX is a community-led decentralized autonomous organization that has collected a large number of NFTs for P2E titles. It awards scholarships to promising game players and lends them the NFTs they need to start playing, with whatever rewards a player wins split between the two parties. UniX also spends a lot of time training players how to win rewards on some of the best known eSports games, and creates tons of educational content. It currently has around 5,000 scholars on its books.

UniX has also created a launchpad for new P2E games to raise money through an Initial Game Offering, and it is even creating its own P2E titles. The first of those games – Bibits – is set to launch later this year.

Its expertise in gaming explains its belief that it can act as a kind of ecosystem builder within The Sandbox. A key area of focus will be in helping brands to create “mini-games” within their virtual worlds, UniX said. Its new games development studio, 1Mhz Studios, whose members have previously worked on movies and games such as Star Trek: Resurgence, Pacific Rim Uprising, and Bygone Dreams, will play a big part in helping brands to create mini-games that they’ll be able to monetize through NFTs.

“We are very pleased to welcome the UNIX Gaming team as a partner within The Sandbox,” said Julien Gratz, Head of Publishing at The Sandbox. “They are one of the fastest-growing and best guilds we saw so far, and their dedication to building a better community thanks to Creator skills and Building skills learning is a much-needed element for our ecosystem; we are definitely a good match!”

Playing such a prominent role in The Sandbox will result in huge benefits for the UniX Gaming community too, it promised. Not only will it boost its already strong standing in the P2E gaming universe, but also create more opportunities for high-profile partnerships with famous brands. That should result in the value of UniX’s native $UNIX token increasing, something that can only benefit everyone within its community.

Ultimately, UniX said it’s focused on becoming much more than just a gaming guild. It sees itself evolving into a true “gaming ecosystem”, of which The Sandbox metaverse promises to become a very big part.

Cardax, The AMM On Cardano Set To Take The Market By Storm With Its Unique Design | Bitcoinist.com