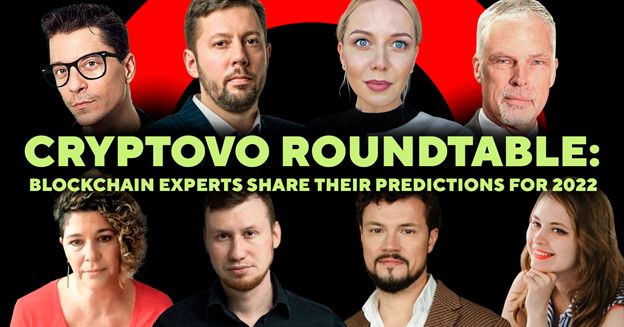 Predictions for Web 3.0, GameFi and the Metaverse in 2022: Perspectives From 7 Blockchain Experts | Bitcoinist.com

The metaverse is trending now, but given that it is currently in its infant stages, the views among the experts differed significantly. O.J. Jordan noted that given the interactive nature of the metaverse combined with blockchain technology, VR would finally receive the much-needed boost to thrive. With this in mind, the value of the metaverse market could rise ten times from the current $70 billion and hit $800 billion in 2 years.

Mary Camacho disagreed and pointed out that the metaverse still needs time to develop an identity. There are many moving parts within the metaverse, including technologies besides blockchain and regulations, which will have some impact. Consequently, it would not be prudent to assume that the industry will achieve rapid growth despite all those complexities. In 2022, the industry’s value will continue to be exposed to new people and brands while some “baby steps” are made in the direction of progress.

Capping off the metaverse discussion, Hans Koning chimed in, saying most people would prefer owning virtual assets over being active in the metaverse. To him, projects such as OpenSea and Decentraland have great potential in addition to Metabrands (he’s an advisor to the project).

GameFi: Should We Expect a Split Audience?

The GameFi space is closely tied to the metaverse. According to Alexandra Demidova, while crypto gaming projects increased in 2021, there is no clear differentiation between them. The market already has a number of strong games, and realistically, there is no indication that we’ll see a new game similar in size/impact to Axie Infinity will arise in 2022.

Mary Camacho sees the GameFi audience divided into two clear groups in the future. The first group comprises gamers that view their actions as earning opportunities. The second group thrives in the games’ intrigue and adrenaline and is likely to be dissuaded by financial aspects. The evolution of Web 3.0 from a fringe theory to a mainstream technology will provide an arena to watch the intriguing separation of these two groups as we pave the way for large, distributed games.

Paul Moukhine jumped in and noted the failure by giant game development studios to see GameFi as gamified DeFi. There are missed opportunities when the industry is viewed from this perspective, and the studios entering the space would create a significant impact.

Music NFTs: The Next Big Thing?

As the panel of experts continued expressing their thoughts on the topics, Sergei Simanovsky pointed out an unexpected driver of blockchain adoption: NFTs. This was not something experts, including himself, had predicted.

Digital artist Beeple made a historic sale when he sold his work as an NFT for $69 million. O.J. Jordan brought up this significant event when he predicted that the next NFT frontier would be music. The appeal of direct ownership and access to royalties solves the control of earnings problem that artists have struggled with for decades.

While NFTs have been transformational in their impact on the adoption of decentralized technology, the consensus among the majority of the experts was that there was a risk of following in the path of the 2017-18 ICO hype. When the hype died down once the speculative bubble was burst, many people incurred losses when selling.

The general feeling is that we’ll see the centralized internet disappearing as a new, privacy-based, decentralized web takes root at some point soon. Mary Camacho highlighted a key hindrance: ease of use. At the moment, people interested in the decentralized web dubbed “Web 3.0” are those that know how to take advantage of it and earn something from it. Its growth will require the user experience to be as seamless and easy to understand as the current centralized web.

In 2022, the desire to remain in control of one’s identity online will be a vital issue. Still, people’s desire to be comfortable with what’s familiar will derail the transition to web 3.0.

The experts predicted that nothing drastic will happen in 2022 regarding blockchain regulation. The ambiguous position over blockchain will continue on issues such as the definition of utility tokens. According to Hans Koning, the US is slated to miss out on opportunities given its regulators’ indecisiveness. States with regulations embracing crypto and those leaving the market to self-regulate stand to leapfrog the US.

The excess volatility associated with cryptocurrencies makes it an enemy of regulators, which is likely to lead to tighter restrictions. Implementation of Central Bank Digital Currencies (CBDCs) is in progress in over 80 countries. Other countries such as China have already rolled them out with the digital yuan in circulation. After the CBDCs are launched, the next step is the restriction or total ban of crypto.

The round table discussion ended with the experts offering their 2022 Bitcoin predictions. O.J. Jordan sees a peak of $120k this year, while Nikolai Shkilev predicts $100k. Hans Koning quickly pointed out that speculators for both extreme ends of the price fluctuations between $20k and $1 million exist, but the actual value will lie somewhere in there. Ultimately, many intriguing trends are evolving as we watch, and they are far more interesting to observe than the Bitcoin price.

What Is AOPP? And, Why Is The Bitcoin Community Up In Arms About It? | Bitcoinist.com

ERTHA One of the Most Searched Play-to-Earn Tokens | Bitcoinist.com