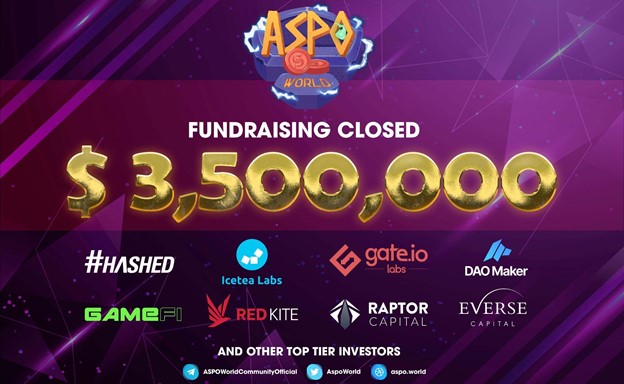 After undergoing 2 beta tests with thousands of players participating, the ASPO World game has officially set an official launch date of February 22, 2022. Similar to the previous 2 beta tests, ASPO World’s Mainnet is optimized on most popular platforms today such as Windows PC, MacOS, Android and IOS.

To participate in the Mainnet, players need to equip a full squad including 1 main champion and 4 Spirits. In which, the main champion is the character that is provided by the publisher to the player when entering the game and 4 Spirits with a minimum price of 400 ASPO Tokens for 1 base lineup, which can be purchased on the project’s Marketplace.

ASPO World is an NFT game built and developed on the basis of advanced Blockchain technology by a team of potential developers with more than 10 years of experience in the field of games and technology, operating in the markets of Thailand, Indonesia, Philippines, and China.

Coming to ASPO World is a modern turnbase NFT card game where players can choose to join one of 3 character classes (Hunter, Fighter or Witch) to start their journey to the throne of the Sorcerer King. By possessing the ability to summon spirits, players can lead squads to participate in battles, perform quests and defeat opponents. Players can take a look at how the game actually looks here.

Accordingly, in each turn, choosing between an attack and defense or using combat skills is vital to create a perfect strategy to defeat the opponent. At the same time, players can show their ability when activating the Soul Fusion state and showcase their strategic minds through brainstorming matches.

Unlike most NFT games on the market today, ASPO World not only focuses on developing the play-to-earn mechanism, which is the main factor creating passive income for players but also has invested heavily in visuals, plot and game logic, bringing a highly tactical gaming experience and moments of true entertainment to the gaming community.

Efforts from the development team and ASPO ecosystem ambitions

Currently, ASPO World’s development team has grown to 40 people with prominent faces in the field of game technology. “In order to develop a long-term NFT game project, the ASPO team has worked day and night, gathering the quintessence of years of development to put it into ASPO World, giving players a truly immersive experience.” shared Mr. Nguyen Ha Minh Thong – CEO of ASPO World.

Despite being a latecomer, ASPO World has achieved strong momentum. After just over 4 months of project implementation, the ASPO team has successfully raised more than $3,500,000, of which $2 million comes from large investment funds such as Hashed, Icetea labs, GameFi, DaoMaker and Raptor Capital, and 1.5 million USD after just over 4 days of opening for sale of INO. Regarding the ASPO token, just after the first listing day, the trading volume reached nearly $24 million according to CoinMarketcap statistics.

Just recently, ASPO announced a partnership with Hashed (one of the biggest VCs in Korea), which was very well-received by the community and also shows how strong the team’s fundamentals are. Hashed has committed to supporting ASPO team on tokenomic enhancement, marketing efforts and global liquidity expansions. This is promised to be an exciting place to start before the upcoming huge event.

ASPO World’s strong development team is public and has maintained a dedication to the original roadmap and tokenomics distribution plan. With the strategic goal of developing a long-term project within the NFT game industry (as well as investing in-game graphics, sound and logic) ASPO World also focuses on 2 their operating system platform and blockchain technology. These help ensure maximum transmission speeds when the number of players is high and spikes, as well as absolute security and safety, solving the problem. network congestion when playing games on the blockchain platform.

Interview with Alfprotocol CEO: “We aim to become a homepage for DeFi on Solana” | Bitcoinist.com